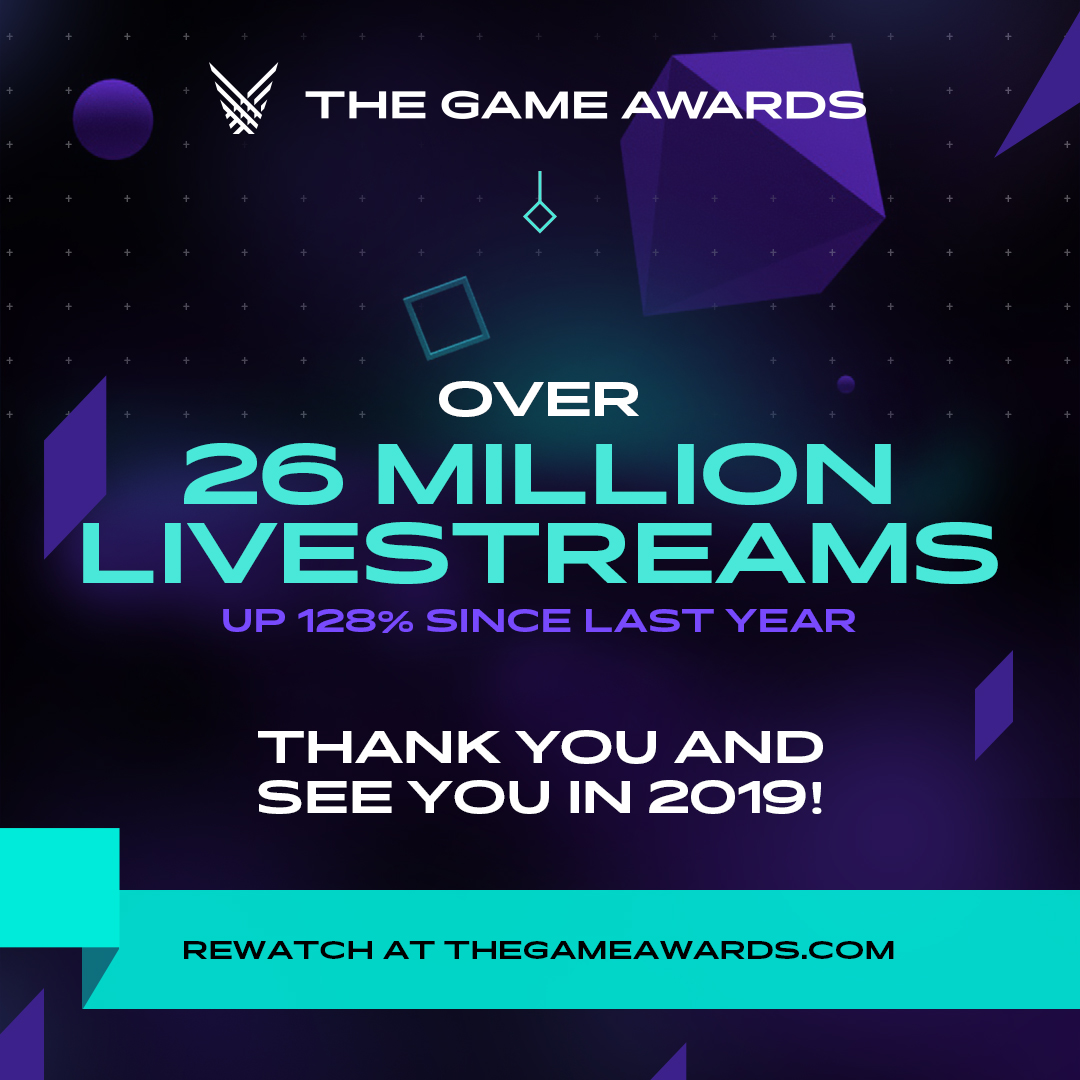 Further cementing gaming’s position as the world’s leading form of entertainment, The Game Awards today announced that its 2018 broadcast more than doubled its viewership to over 26.2 million global livestreams, up 128% from 2017’s record-setting performance of 11.5 million livestreams.

Airing live from the Microsoft Theater on Thursday, December 6, The Game Awards delivered significant growth across all metrics including viewer voting, social engagement and co-streaming. The Game Awards program became one of Twitch’s biggest livestreams to date with over 1.13 million concurrent viewers watching the program on Twitch at its peak, nearly doubling last year’s Twitch viewership. In total, peak concurrency for the show is estimated to have reached over 4 million global viewers, including more than double the number of concurrent viewers on YouTube compared to the 2017 broadcast.

“Five years in, it’s amazing to see The Game Awards continue to grow both domestically and internationally,” said Geoff Keighley, creator/producer/host of The Game Awards. “These results further validate our focus on an all-digital, no-friction approach of sharing this show globally across more than 45 video platforms, not to mention the growing interest and passion for video games around the world.”

On social media, The Game Awards was the #1 worldwide trend on Twitter for the 4th year in a row, trending faster than ever before.  #TheGameAwards hashtag usage was up 1.6x over 2017 and overall conversation was up 1.9x YOY, with more than 1.8x the number of unique authors. In addition, the livestream on Twitter reached 1.3x more unique viewers compared to 2017. On the Chinese social platform Weibo, Game Awards related posts achieved more than 56 million views from 310K unique individual postings.

Interactive and co-streaming elements increased live engagement during the broadcast. On Twitch, The Game Awards Extension gave creators and their audiences a chance to predict winners in all the main show categories, with “Cellbit,” a popular creator in Brazil, winning the prediction game alongside his viewers. All told, more than 3,300 Twitch creators co-streamed the program live (up over 140% YOY), with many translating the show in real time for their fans.

Online authenticated fan voting for The Game Awards delivered a 50% YOY increase to more than 10.5 million logged-in votes, with fans selecting their favorites across The Game Awards website, as well as on a Discord server, Twitter DM, Facebook Messenger, via voice on Amazon Alexa and Google Assistant and in China via a dedicated voting hub on Bilibili.

To date, here are the livestream numbers for The Game Awards (does not include VOD viewership):

The Game Awards is executive produced by Geoff Keighley and Kimmie H. Kim. LeRoy Bennett is creative director, and Rich Preuss is director.